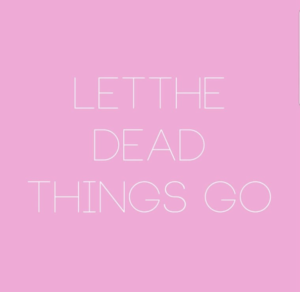 If you’re here long enough, you’ll get handed all kinds of things. Some of those things were alive, valid, and relevant when you received them, but now they’re dead. Whatever they were, they no longer are. Therefore, holding onto them past their expiration date is a waste of life. Maybe your open hand held something  like a perfect flower or maybe, instead it was something difficult to handle like a cactus. Either way, once it died, you would know to drop it. But, what if you carried it around, every day? At first, it would be wilted, but then, it would deteriorate to an extent that would make it unrecognizable. But, you keep looking at it, watering it, thinking about it, being nostalgic/sad/longing over something beautiful or perhaps angry/bitter/hurt over something ugly and painful. You can do whatever you want, but it won’t change the fact that it’s dead. I know, I’ve held a lot of dead things. Some of those things,  I didn’t even want, but life gave them to me and I had to learn to live with them while they were alive.  You’d think, I’d be eager to release those once they died, but sadly, there were periods of time I’ve held onto some nasty, rotting things far too long. Yet, there were other things I was given that I loved and, to me, they were so incredibly beautiful. My desire would have been to keep them alive but that was not to be. Now, none of these things possess life. I cannot continue to carry them around any longer because it requires time/energy that will never reverse their death. It also makes it difficult to live when your hands are occupied with dead stuff. It even makes it hard to hold something new. So, let the dead things go.

“Forget about what’s happened;
don’t keep going over old history.
Be alert, be present. I’m about to do something brand-new.” Isaiah 43:18-19 TM

“I do not consider myself to have taken hold of it. But one thing indeed: Forgetting the things behind and reaching forward to the things ahead,” Phil 3:13

One thought on “Let Them Go”